There are times when I feel my culinary life has been taken over by a certain fruit or flavor. When every market stall, my kitchen table and even my brain is immersed in a single-minded symphony of strawberries or tomatoes, when the choice seems so limited but the possibilities endless. The last few weeks have seen us up to our knees in tomatoes and I don’t think I’ve cooked a meal for over a month that hasn’t included tomatoes in some shape or form. These food invasions are part and parcel of being on that carousel of seasonal cooking and the thing I love most is that they are all so predictable and comforting in their repetitiveness, for what are traditions but a repeat performance of last year’s feast. The fava bean deluge of April, the artichokes of May are no less predictable than Christmas or Easter – you know they’re coming and you prepare to enjoy them. But then there is that other type of food invasion, the ones that don’t dance to the tunes of the calendar but rather to fashion and whimsy and blind chance. You might come home from a holiday in Italy and have Aperol Spritz every day (until you’d never want to have it again) or you suddenly get a delivery of 30 kg of rice and you deliberately cook around it. You start with curries and Chinese dishes but then you start thinking of French ways of including them like blanquette de veau or a colonial dish like kedgeree. 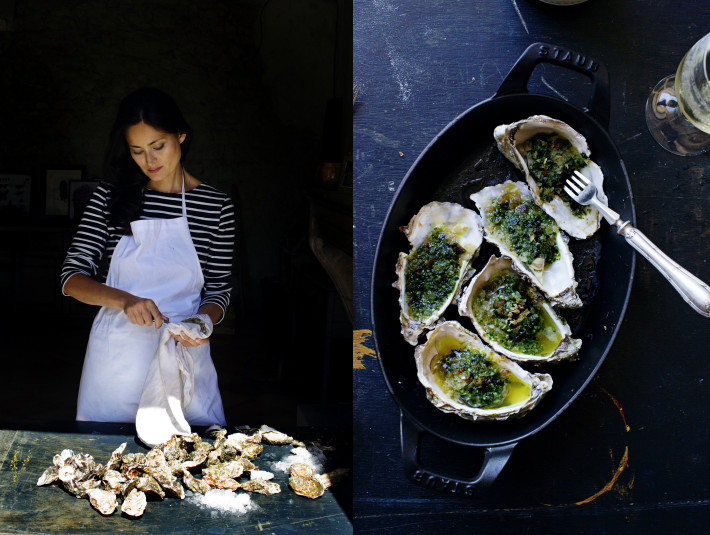 Two weeks ago we were attacked by molluscs. Living in Médoc oysters are very much part of every day life, and while they are, in my mind at least, associated with the colder months, such rules have little meaning when you live close to oyster paradise. Every market in the region has at least one or two oysterman and on weekends roads are lined with little trucks or tables offering oysters to passersby. So we tend to have them about once or twice a week, usually as a starter and almost always raw, with just a squeeze of lemon or with a drizzle of shallots in vinegar. To have more than 6 or 12 at a time or to have them three days in a row, that hardly ever happens. Until two weeks ago. It all started in Bordeaux. We had gone there for some business that must have been very tedious since I have completely forgotten what it was. To make the day more enjoyable we had decided to try a new bistrot, recently opened in Bordeaux, called Le Glouton. It’s owned our friends, Ludovic le Goardet and his wife Elisabeth. He used to be the chef at our beloved Café Lavinal in Pauillac. Due to poor planning and Friday traffic (mainly poor planning) we arrived so late that everyone else had left and to make up for lost time we just phoned ahead to ask the chef to serve us what ever he liked and was most convenient for him. First we had baked oysters with Béarnaise sauce, then chicken in puff pastry, beef cheek raviolis and the richest grilled chocolate mousse. All delicious but afterwards I kept thinking about the oysters. I’ve had baked oysters a thousand times, with shallots, wine, en persillade … but this I’d never had. And I wanted it again. The next day we bought some oysters at the market and I tried my own version. It worked, not least when paired with rosé. It’s a decadent combination, feels modern and old-fashioned at the same time, and so fitting for the season, like a swan song to summer and a welcome for autumn. We did, however, want more oysters. The next day, a Sunday, we headed for Cap Ferret which in September is as close to perfection as you can get. The crowds have mostly gone but it’s still lively, with less traffic and no reservations. We had the loveliest of Sundays, and we had oysters … lots of oysters.
One of our rituals are the mussels with sausage meat and french fries at Chez Hortense but because we were in an oyster mood we added a sneaky order of baked oysters en persillade and another of baked oysters with foie gras. Then we headed to the oyster shacks that are everywhere, local producers who make oysters for the rest of France but offer visitors a chance to taste the delicacies. These are simple, no fuss institutions, with (sometimes mismatched) wooden tables and chairs, with extremely limited choice (read only oysters) and a choice between white, rosé or red. If you don’t like oysters these are not the places to be. Driving home, enjoying the fluidity of the road I decided that my next post (if I would ever have the time to do one) would be dedicated to oysters. In fact, considering how much I love them I feel like I have been neglecting them. They are such ideal food, low in calories, easy to prepare, fantastic little proteins that are rich in calcium and iron. And simply so delicious. The following Tuesday we bought 6 dozen oysters at the market. I wanted to recreate some of the flavors from my oyster weekend and perhaps come up with a few of my own. Mainly I just wanted more oysters. Oddur and I did what we love best, threw all the oysters on our blue table and started opening them side by side. In the course of the day I made one recipe after another, we shelled, cooked and shot. My mother-in-law who doesn’t like oysters at all asked “what are you going to do with all these oysters when you are finished photographing them?”, eating them was for her out of the question. The kids were all at school so no help to be found there (most of them have come to appreciate oysters). In the end we just ate them all, one type after another, paired with rosé and white and Sauternes, between lunchtime and “pick-up kids from school time” 72 oysters found their way into our stomachs and each one tasted better than the next. It was where gourmandise meets gluttony.
Having 72 oysters in one sitting is a small achievement but when compared to the endeavours of a much more famous glutton, Honoré de Balzac himself it simply feels like a very light lunch. Balzac was famous for discipline when writing his books, working for 18 hour stretches and keeping himself hungry by feeding himself only fruit and the strongest “stomach burning” coffee. When the book was finished Monsieur Balzac completely changed his tune, headed to his favorite restaurant and famously cried out “Garçon, un cent d’huîtres!” or “Waiter, a hundred oysters!”. This he washed down with four bottles of white wine, followed by a dozen lamb chops, a duck with turnips, partridge, a Normandie sole and finally dessert. I don’t think I will ever scale the heights of Monsieur Balzac but one can always aspire.

When the children came home from school that night and asked the question they always ask “what’s for dinner?” I simply answered “Not oysters!”

ps: Just a quick reminder for those of you who have or will order my cookbook “A Kitchen in France” that you have a nice print waiting for you and all you have to do is click here and fill in your details. Oysters in a Béarnaise sauce

Clarify the butter – melt the butter in a saucepan on a low heat. Simmer gently until the foam rises to the top. You should see the milk solids separating. Set aside to cool slightly, discard the foam, and pour the clear clarified butter in a bowl. You only want to keep the ‘clear’ butter which is perfect for cooking on high temperature and making sauces. (You might want to use a fine strainer if you wish).

In another saucepan, combine the vinegar, white wine, finely chopped shallot, the herbs, salt and pepper and bring to a simmer on a medium heat. Remove from heat, add the 2 egg yolks and the 2 teaspoons of water and whisk continuously. Return to a low heat, continue to whisk, and remove from heat every 1 minute – repeat this process for 8 minutes, constantly whisking until the sauce thickens. Remove from heat and add the cooled clarified butter, continue to whisk until smooth. Return to the heat and whisk for 30 seconds, or until the sauce coats the back of a spoon. Set aside and leave to cool.

Whisk the heavy cream until stiff, and fold into the cooled Béarnaise sauce.

Shuck the oysters. Place a teaspoon or 2 of the sauce (depending on oyster size) on top of each oyster. Arrange oysters in an oven-proof dish or tray and place under a preheated grill for about 3 to 5 minutes, or until the sauce is bubbly and golden. Sprinkle fresh chervil on top (optional) Serve immediately. In a food processor, mix garlic, parsley, salt, pepper and nutmeg and mix for 30 seconds. Add the butter (at room temperature) and mix 10 more seconds until you get a smooth paste.
Shuck the oysters. Place a teaspoon of garlic butter on top of each oyster and sprinkle with breadcrumbs. Arrange oysters in an oven-proof dish or tray and place under a preheated grill for about 5 minutes, or until the garlic butter is bubbly and golden. Serve immediately. Shuck the oysters. Place a small slice of foie gras on top of each oyster, then pour one to 2 teaspoons of Sauternes wine. Season with salt and pepper. Place oysters in an oven-proof dish or tray and transfer to a preheated grill. Cook for 3 to 5 minutes. Serve immediately. For the garlic breadcrumbs
3/4 cup/45 g breadcrumbs
1/2 clove garlic, minced
Mix both ingredients together in a small bowl.

Slit the sausages sideways and squeeze the meat out of the skins.

Heat the butter in a sauté pan over medium heat. Cook the shallots until softened, add the sausage meat, garlic, thyme, nutmeg, salt and pepper and stir, until the meat is cooked. Pour in the wine and continue to cook for 3 minutes. Take off the heat & set aside.

Shuck the oysters. Place 2 teaspoons of the sausage filling on top of each oyster. Sprinkle garlic breadcrumbs on top and drizzle a bit of olive oil. Arrange oysters in an oven-proof dish or tray and place under a preheated grill for about 3 to 5 minutes, or until the breadcrumbs are golden. Sprinkle the chives on top. Serve immediately. 124 thoughts on “Oysters in the afternoon”