1800
It is the 14th of June. We are in Marengo, Italy. A man named Dunand, a chef, is having a tough day. He’s been trusted with the task of cooking something good for his boss but on this day all the supplies are far away and he has to improvise. A Frenchman, used to cooking everything with butter, Dunand turns to olive oil on this fateful day. He knows his foundation will be the readily available chicken, but cooked how? His scouts turn up with various ingredients, some tomatoes, eggs, crayfish. What a mess. He finds the best possible way to cook with those ingredients, puts them on a plate and voilà, presents the dish to his master. His boss is Napoléon Bonaparte who, luckily for Dunand, happens to be in a good mood that particular evening. He has just defeated the Austrians in the battle of Marengo. Napoléon absolutely loves the chicken, he’s not a big gourmand but this he likes. The chicken Marengo is born. In fact Napoléon likes it so much (or is so superstitious) that he insists on having this dish after every battle thereafter, crayfish, eggs and all. Dunand later tries to swap the crayfish for mushrooms, and adds a slug of wine. Bonaparte won’t hear of it. All he wants is the original version – for good luck and (hopefully) also for the taste. 1820
A young and ambitious man, Jean Véfour, who had been the personal chef to Louis-Philippe the future king of France, buys a tavern in the Palais Royal, names it after himself (as ambitious men tend to do) and turns what really was a mere pub into the finest restaurant in Paris (centuries later, when I have my wedding lunch there it’s still one of the finest places around). For the next hundred years his guests are the cream of Parisian society, politicians & artists including Colette and Victor Hugo. What do they eat? But of course, chicken Marengo, this time with truffles. It’s the chicest dish in Paris, and everybody who is anybody has to have it all the time. “What did you have last night?, roast chicken, how banal – we had the Chicken Marengo” – sounds so fancy, tastes so divine. The Grand Véfour achieves legendary status and chicken Marengo gradually appears on menus of practically every restaurant in France. There are different versions, some with olives, others without crayfish but with mushrooms instead (as Dunand intended). The Grand Véfour gives birth to countless other restaurants, the chicken Marengo breeds endless imitations. It is yet another triumph for local and seasonal cooking, take what you have and make the best of it. 2014
I wake up one Friday morning in a Bonaparte state of mind. I guess I am feeling victorious and confident or simply hoping for a bit of good luck. All I know is that I want chicken Marengo on my table. I send my scouts (Hudson, Oddur & Mia) to source the best possible produce and they don’t let me down. For the chicken they take the long journey to the Vertessec farm where chicken tastes like heaven, how can I describe it – it’s chicken but better . Going there is such pleasure, the quality, the service, the lovely little store filled with every poultry product imaginable. It’s one of those things that’s hard to describe in writing without it sounding like an ad filled with overblown adjectives. Let’s just put it this way, every time we have their chicken I look at my husband and say “We can never have any other chicken, ever!” Then of course we sometimes do, but the Vertessec chicken haunts our palates and every other chicken compares unfavorably. French food is good because of the produce and the produce is what it is because of artisans like the Petit’s of Vertessec who have made it their life’s mission to simply breed the finest poultry. After the visit to Vertessec my scouts visit the Saturday market. They get the tomatoes I requested, the mushrooms, there are no crayfish but as we had discussed they get “langoustines” instead. The surprise of the day is that Pierre Aubert, an organic farmer par excellence who grows the most beautiful vegetables in all of Médoc, happens to have some fresh artichokes from the mini-harvest in this “early spring” (yes I know it’s still winter). What can a modern day Dunand do with fresh, green, tight artichokes? Well, I think of the Grand Véfour and am reminded of another master, Guy Martin, who makes an artichoke crème brûlée. His has sugar on it, but mine needs to be savory as I already have plans for dessert. Inspired by Italy and Marengo I stay with the theme and subsitute the sugar for parmesan cheese, equally crunchy but with a totally different effect. I am pleasantly surprised, it turns out so smooth and tasty. For dessert I make use of some very large pears that have been challenging me for a few days on my kitchen table. Their days are numbered, they are sentenced to be included in an almond and pear clafoutis. At the last-minute two of them are pardoned, my husband needs them for a photo. (It is a short-lived escape, both of them end up in Mia’s mouth. It’s a Chinese superstition never to share a pear, Mia makes the most of it and uses it as an excuse to have them all by herself – technically this only applies to sharing one pear but it seems that the laws of superstition are flexible). 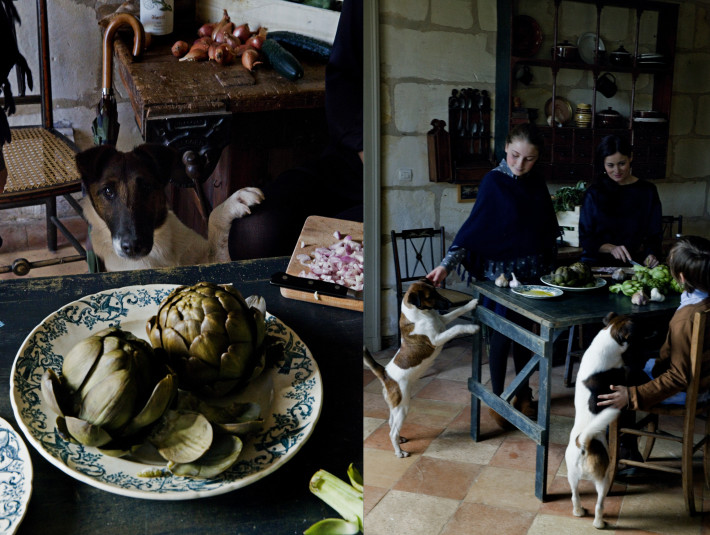 What else do you need to have a grand meal in Médoc, we have Pierre’s artichokes, the Vertessec chicken and somewhere in our cupboards are the Napoléonic knifes that need polishing after every use and a beautiful carafe from the same period. These are little gems I’ve found at Anne’s brocante in Saint Christoly and they bring a sense of history to the meal. In the absence of my mother in law who is the real historian in the family, and knows the truth about every fountain in Paris, my husband enlightens the kids about Napoléon & Joséphine, his conquests and exile. Hudson’s favorite part is when his father stands on a chair and say “Soldiers of the 5th regiment don’t you recognize your emperor, kill me if you like”. My French education tells me that some of the stories are made up and they’re all the better for it. On Sunday morning I find out that my scouts have gone behind my back and  kept a secret from me. In addition to the chicken at Vertessec they bought some very tasty chicken sausages and hid them in the fridge where we keep the dog meat (I never go there). With some fanfare I am presented with a surprising and beautiful breakfast, farm eggs, the fried sausages, white bread (my guilty pleasure), a few fried spicy confit tomatoes and my favorite tea, the French breakfast tea from Mariage Frères with a hint of malt and chocolate. A breakfast fit for an emperor. The artichoke crème brûlée is a dessert served at le Grand Véfour, mastered by chef Guy Martin. I made my own savoury version, and sprinkled grated parmesan. Simply delicous, and so easy to make! If you can’t find fresh artichokes, you can buy frozen artichoke hearts.

Cook the artichokes in salted boiling water for 25-30 minutes. Pluck the leaves and discard the fuzzy choke. Slice the artichoke hearts and purée them in a food processor.
In a large bowl, whisk the egg yolks with the cream and gradually add the artichoke purée, nutmeg, salt and ground black pepper.
Pour mixture into 4 ramekins and bake in a preheated oven 140°C/ 280 F and cook for 25 minutes, or until the cream has set (yet slightly trembling). Sprinkle with parmesan cheese and place the crème brûlées under the grill for a couple of minutes, or until golden brown. Alternatively, you can also use a torch to grill the cheese. Serve immediately. Chicken Marengo with langoustines
serves 4 to 6

Traditionally this dish is cooked with crayfish, but I used langoustines instead. I love the deep flavours created by the combination of tomatoes, chicken, wine, the langoustines and cognac. If you do not wish to use crayfish or langoustines, you can simply cook this dish with mushrooms – just double the amount of mushrooms.

Season the chicken pieces with salt and pepper and gently coat with flour. Heat 3 tablespoons of olive oil in a sauté pan and brown the chicken in a large cocotte/ dutch oven with olive oil on all sides until golden. Discard excess oil and add the shallots, garlic and carrots – cook for 4 minutes on a medium heat. Add the bouquet garni, season with salt and pepper, and add the white wine. Reduce for 2 minutes. Add the chicken stock and continue to cook for 3 minutes. Add the tomatoes and tomato concentrate, continue to cook for 3 minutes, then lower heat and cover with a lid. Season with salt & pepper. Leave to simmer for 35 minutes to 45 minutes, depending on size of chicken (larger pieces take more time to cook).

Meanwhile, in a large sauté pan, heat 2 tablespoon of olive oil and sauté the langoustines with 1 clove of finely chopped garlic. Season with salt and pepper and add the cognac. Reduce for a minutes and continue to cook until langoustines are opaque and cooked through. Take off the heat and set aside on a plate with all its juices. Keep warm. In the same pan, sauté the mushrooms with 1 tablespoon of olive oil. Season with salt & pepper. Set aside.

Add the langoustines and mushrooms and all its juices into the pot and mix the ingredients gently. Continue to cook on a low heat for 15 to 20 minutes. Sprinkle with chopped parsley just before serving.
Serve with roast potatoes with red pepper or wild rice.

1 kg/ 2 ¼ pounds potatoes/ peeled
2 red peppers, deseeded & sliced
2 garlic cloves, unpeeled
Olive oil
Coarse sea-salt
Parboil the peeled potatoes in boiling salted water for 15 minutes. Slice them into rondelles and place on a roasting dish. Add the sliced red pepper and the garlic cloves (unpeeled). Drizzle with olive oil and sprinkle with coarse sea-salt.
Transfer dish to a preheated oven 210°C/410F and cook for 30 minutes or until potatoes are golden. I am a little obssessed with almonds. I have them for breakfast everyday, drink a glass of warm almond milk every night and these days, I just add almonds to everything! This clafoutis is light and heavenly, my family loves this dessert, especially with some Chantilly cream on the side. If you do not wish to use almond milk, simply use regular milk.

Mix the sugar and eggs. Add the flour, and gradually pour the almond milk. Mix gently, then add the honey and vanilla extract.
Butter a cake mould 23 cm/ 9 inches and sprinkle with flour.
Pour half of the batter, place the pears, and sprinkle with 40 g/ ¼ cup slivered almonds. Pour the rest of the batter on top, dot with the butter, sprinkle with 1 tablespoon of slivered almonds and 1 tablespoon of brown sugar.
Place in the preheated oven and bake for 40 to 45 minutes, until risen and golden brown. Leave to cool for 20 minutes and serve lukewarm (or cold) with a dollop of whipped cream.